The Blind Men and the Elephant

Parables are short stories that teach a moral or spiritual story by encouraging us to look at ordinary life in a deeper, more profound way. Allegories, in a similar manner, are stories that also reveal hidden truths, but more often involves characters, settings or events that represent other key issues. Hence my retelling of this ancient parable with a modern, allegorical spin.

The “Elephant in the Room” in this allegory is the coronavirus. Our individual and collective response to the pandemic represents the blind men, each with a laser focus on his/her specific perspective as the “Holy Grail” to end this pandemic. To the vaccine developers, a warp speed vaccine is the key. Pharmaceutical companies see new or repurposed drugs. Government and Academic institutions with established research facilities see their superior intellect as the key driver in any true medical progress. Physicians are trained to prescribe only those therapies that have been proven in large randomized controlled trials (RCTs) and approved by the FDA or recognized clinical pathways. This therapeutic inflexibility persists even in the face of greater numbers of their patients now dying. Scientists developing more natural, dietary and/or non-pharmaceutical therapies are still bound by the rules of scientific inquiry which requires a focus on a single variable/intervention in their research to have any chance of achieving statistical significance and possibility of acceptance.

My combination of vitamin D3, vitamin C and the probiotic beverage Kefir has proven to be effective for acute viral infections in my medical practice for over 20 years, and now is proving to be equally effective against acute COVID19 infections. The regimen consists of readily available, safe, and inexpensive components, and exists in an environment where no other approved outpatient treatments are currently available. In our experience, most patients are significantly improved (if not completely well) within 24 hours at a cost of about $10. No downside in trying this when first falling ill.

Even in absence of solid empirical evidence, treatments that are benign and safe, have anecdotal evidence of effectiveness, and scientific plausibility can be consider as ethical choices for healthcare providers to recommend. Risk vs. Benefits. As to scientific plausibility, over the last 8 months I have re-posted 22 published papers supporting the role and/or benefits of Vitamin D3 in COVID19 infections, 7 on the use of Vitamin C, 9 on the use of Kefir and other probiotics, and 4 on the benefits of Lactoferrin and tryptophan (both present in Kefir).

So why is it still such a leap of faith to assume that the combination of these 3 simple ingredients might produce an even greater benefit against acute COVID19 infections? It intuitively makes sense to me, but I have still been unable to interest anyone in Organized Medicine to participate even in a quick proof of concept study to confirm my findings. A bid from a recognized contract research organization (CRO) to do such a study came in a $3.5 million dollars. Obviously, that is not going to happen. So even with 200,000 more projected to die in the coming months before a vaccine becomes readily available, and despite the possibility that this Quick Treat regimen might save innumerable lives in the interim, the blind still cannot see the elephant. 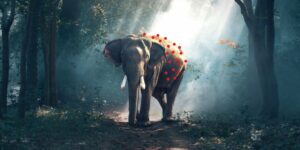